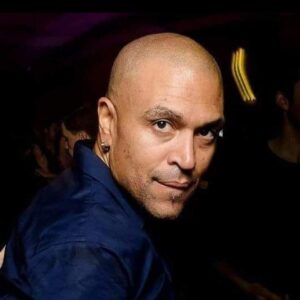 The director of the legendary Santo Rico dance company founded in New York, Tomas Guerrero, has significantly influenced and shaped the style of Mambo dance as we know it through his work over the past two decades. Coming from a street dance background, Tomas is an innovator in the art of dancing mambo-style salsa. In 1998 he developed the “Santo Rico Spin Technique,” where he incorporated multiple continuous spins in his choreographies and established a curriculum for multiple spins for follows. Under Tomas’ direction, Santo Rico became one of the world’s most influential salsa dance organizations, serving as an inspiration and training platform, especially for New York’s most well-known dancers, performers, instructors, directors, and dance companies.

Some of Tomas’ achievements include dancing for salsa mega superstars, including Tito Puente, Óscar De León, José Alberto “El Canario,” Sonora Ponceña, Marc Anthony, and Gilberto Santo Rosa. Further, he has traveled to and performed at salsa congresses in six (6) continents, 47 countries, and 40 US cities and is featured in his HBO documentary “El Espíritu de la Salsa.” 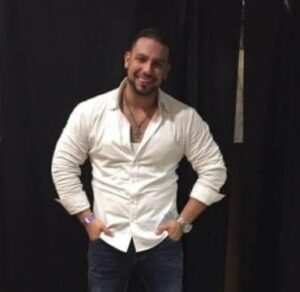 Javier’s experience in Latin dancing dates back to 1998, when he took his first Salsa class. He also performed with a local group called the Hispanic American League of Artists (HALA), where he later became the head instructor/director of the Latin dance division. In 2004, he attended an off-Broadway show called Latin Madness and saw Santo Rico’s famous “Gangsta” routine for the first time. At that moment, he knew Santo Rico would be his new home for learning the Mambo salsa style and began traveling from Allentown, PA, to New York to take weekend classes with Santo Rico. Subsequently, Javier started teaching adult classes in Pennsylvania and did so for 12 years. In 2005, he created and trained two teams of students. The teams achievements included dancing on stage with Larry Harlow and Tito Puente Jr.
After a long hiatus from dancing due to several knee surgeries, he moved to Tampa in 2016, where he married his lovely wife, Sarai Morales. While in Tampa, he discovered that Tomas Guerrero had moved to the Orlando area. Javier began traveling long distances, from Tampa to Orlando, to train with Tomas. Subsequently, one of his dreams was realized when Tomas invited him to be part of his performance teams. As a member of Santo Rico, he performed at Orlando Salsa Congress, Tampa Salsa/Bachata Festival, New Orleans Salsa Festival, and Atlanta Salsa Festival. Javier is currently among Santo Rico’s most experienced members and a certified instructor at Santo Rico Dance Florida.

Luc is a multi-talented, multilingual dancer, performer, and instructor originally from the Congo, Africa. Luc’s love for Latin dance and its music began in 2006 while living and working in Spain. After returning to his home state of Michigan, he began ballroom dancing to add to his dance repertoire. He later trained as an instructor for many popular styles, such as American Smooth, Rhythm Dances, and Night Club dances.

Some of Luc’s achievements include winning the Heat at the Niagara Salsa Congress. He’s also certified in Mambo and Bachata instruction. In 2011 he moved to Boston, where he returned to his love of Latin dance, where he trained under Mario Neris at Mambo Revelation. In 2015 he relocated to Orlando, FL, and discovered Santo Rico Dance Florida, where he began training with Tomas Guerrero. Luc is currently a certified Mambo dance instructor at Santo Rico Dance Florida. 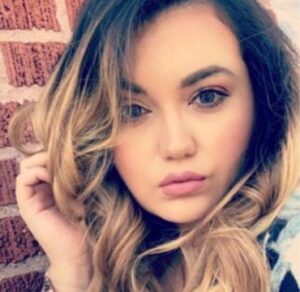 Sabrina Samolyuk is a talented, passionate, and motivated performing artist born and raised in New York City. She discovered her love for music and dance at age 4. She began training at VSPAC (Vicky Simegiatos Performing Arts Center) in Ballet, Tap, Jazz, Hip-Hop, Contemporary, Pointe, and Musical Theatre. She spent  13 years with VSPAC, highlighted by her role in The Nutcracker. In addition, she played significant roles in her High School Musical Theater productions, including Kilroy was Here, Hello Dolly, and Hairspray (she was the lead, Penny Pingleton).

In 2013, she was accepted into the University of New Haven, where she Auditioned for Monsoon Dance Crew, became President, and discovered her unique Hip-Hip style through choreographing for many showcases, competitions, and private events.
Sabrina wanted to become more in touch with her Hispanic roots, and in 2017 Auditioned for ‘Incendio’ the University of New Haven’s first Latin Dance Project, where she made her first debut as a Latin Dancer. Post-Graduation, she continued to train in Hip-Hop and Latin Dancing at many facilities such as Broadway Dance Center, La Salsa de Hoy, and Salsa Salsa Dance Studio.
In 2021, Sabrina and her immediate family moved to Florida, and in July of 2021 began training with Tomas Guerrero. She is very excited to be allowed to share her passion and admiration of dance with the Santo Rico Family.